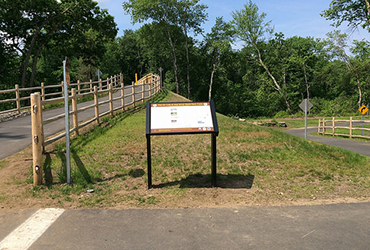 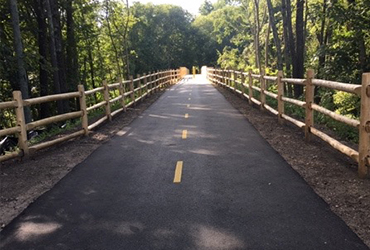 The Willimantic River Greenway intersects with the Hop River Trail , the Airline Trail and the East Coast Greenway at several sites that comprise our proposed linear park and arts and recreation hub.

This represents a grand total of 58 miles in Eastern CT alone. However, the Hop River Trail continues from Bolton to Hartford and then into the Farmington Valley. When fully completed, the East Coast Greenway will run from Calais, Maine to Key West, Florida eventually totaling 3,000 miles.

These trails provide literal and figurative connections to other places and times. Take the Airline Trail for example, with its lofty name resonating with rail history, so reminiscent of everything Willimantic. Conversion of the former Airline Rail into a multi-use trail, threading from Willimantic through Lebanon to East Hampton, will provide a tour through the past, beginning at the Bridge Street Park and Trailhead, site of the historic Windham Cotton Manufacturing Company mill, then travelling the short distance to the Connecticut Eastern Railroad Museum, and continuing on through the country setting the former rail line follows.

After viewing the award-winning Frog Bridge or learning about the "Battle of the Frogs," a curious adventurer may forego the Airline Trail, choosing instead to take the short leap to the Hop River Trail, a portion of the East Coast Greenway which threads along from Willimantic to Bolton, to Manchester, to the Farmington Valley and beyond, all the way to Key West, Florida. Alternatively, after visiting the Windham Mill & Textile Museum, a traveler may take the Airline Trail North beginning at the Veterans Memorial Trail to Putnam, CT and on to Maine, along the full length of the East Coast Greenway.

The benefits of developing the East Coast Greenway are numerous including connecting residential areas, parks, businesses and downtown's to public attractions; providing an alternative to driving on streets, which reduces roadway congestion, and providing easily-accessed facilities for walkers, cyclists and skaters. Providing access to communities and their services, the Greenway offers economic benefits to towns along the route. Investing dollars will yield substantial community-wide return on the investment, increased property values, business attraction, and recreation revenue, and reduced water treatment and flooding costs. Greenways attract and retain tourists and expand tourism revenues in many communities. Trail users spend money in places such as hotels, restaurants, retail stores, campgrounds, bicycle shops, bed and breakfasts, gas stations, and ice cream stands.

The East Coast Greenway is a reminder that Willimantic has always been connected to the larger network, the world community, through rails, industry and innovation. These networks will evolve, the trails serving as the medium through which visitors will transport through time and place, through the New England Industrial Revolution and Willimantic's Victorian heyday, along rails of another time, down historic Main Street and through the New England countryside.